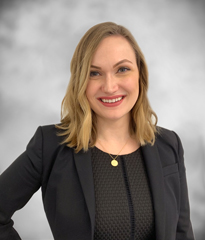 Courtney Lang serves as Director of Policy on the Trust, Data, and Technology team, focusing on issues related to cybersecurity, privacy, and other emerging technologies. Prior to joining ITI, Courtney was a trade policy analyst at the U.S. Department of Commerce's International Trade Administration (ITA), where she worked to understand the priorities of U.S. technology companies and helped them to overcome trade barriers in markets overseas. Her areas of focus included mobile & wireless communications (including 5G), cybersecurity, and the Internet of Things. During her time at ITA, Courtney worked to promote policies that would facilitate trade and support innovation. For example, she established and led the Trade in the Digital Economy Working Group under the U.S.-Brazil Commercial Dialogue, aimed at addressing digital trade barriers in Brazil, as well as a long-term project to promote risk-based approaches to cybersecurity in the Asia-Pacific. She also worked on developing and executing a strategy aimed at supporting U.S. competitiveness in the 5G telecom technology sector.

Courtney holds an MA in Security Studies from Georgetown University and a BA in Political Science from Duke University.